An exhibit dedicated
by the JMC of Macon
SEMI VELOSOLEX factory,
from May 18 through May 29, 2015
part 1 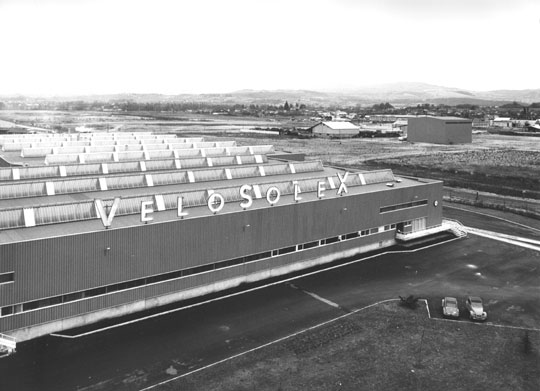 THE SEMI – VELOSOLEX FACTORY OPENED IN 1969

- SEMI - VELOSOLEX - 1970
The VELOSOLEX Company proceeded to the establishment of a new plant, located in the South industrial area Macon, on a 24,800 m2 plot, and served by a S.N.C.F. railway connection
The first step was the construction of a storage and distribution facility for spare parts.
The facility began service June 1st, 1969. It served the entire dealer network in France and abroad. It also distributed bicycles to its agents. The facility covered an area of 3,840 m2. It featured a raised loading dock, 1.20 m from the road level, which eased the loading and unloading of trucks and trailers and greatly facilitated handling operations.
In April 1970, an additional 5,200 m2 facility was built which was for the fabrication of Velosolex mopeds. It included stamping, welding, painting, and assembly operations for the new “Flash” model in its various versions.
It should be noted that in this shop painting was by means of epoxy powder-coating. This line consisted of three painting booths, one for each of the three colors being produced, which allowed great flexibility as to which color was being used. .
It would not be out of the question in the near future, for this unit of the Velosolex Company to expand to produce a greater proportion of its product range. 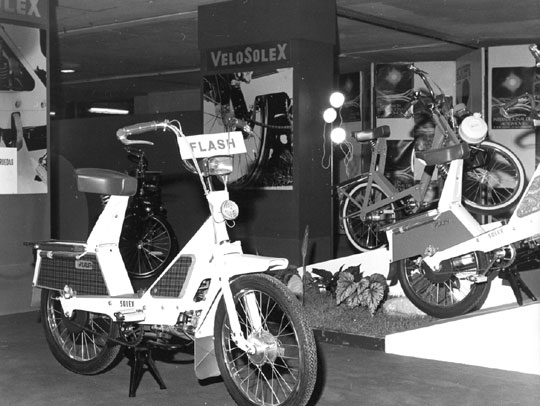 In order to mass produce the "Flash Solex", the first moped with automobile technology, a new factory was built in Macon.
In 1969, Solex presented its latest creation: the Flash Solex, proving once again that there were still innovations to be made with mopeds.
The technical and aesthetic qualities of the Flash confirmed what we already knew: today, Vélosolex is synonymous with high-tech and constant innovation in the field of two-wheel production! 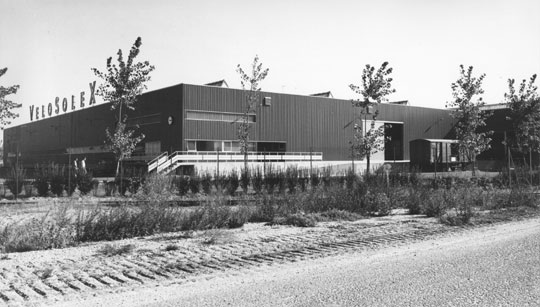 "The Velosolex plant in Macon has a railway connection"

In 1972, SEMI completed its plant with a two story warehouse facility (3,000 m2 area X 2). This building was raised 1.2 m above grade to facilitate loading and unloading and also to protect it from possible flooding of the river Saône. 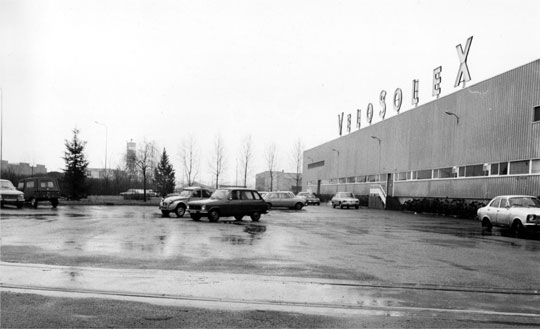 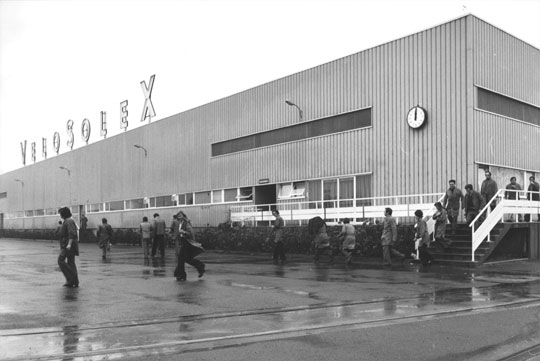 "Noon ! A 15-minute lunch break for the workers"

At the beginning of the 1970’s, there were three assembly lines:
- One for the 3800.
- One for the 5000.
- One multi-purpose line (Flash, 6000, and Tenor).
A line was 20 meters long in a loop, 10 meters on each side, with 10 workers per line on 5 work stations.
Daily production in Macon was:
- 260 solex 3800 per jour
- 260 solex 5000 per jour
- 130 solex 6000 per jour
The workforce consisted of about 300 full-time workers and up to 400 including part-time employees.
Wheels were assembled on the first floor level, mainly by women, the wheels then went by way of a slide down to the assembly line.
VeloSolex engines were assembled and tested at the Courbevoie factory and then shipped to Macon.
There was a good working atmosphere on the line despite the cadence and difficult schedules.
- 0700h to 1200h (with a 15-minute snack break and another 10 min break)
- 1200h to 13h30 lunch break
- 1330h to 1730h, (with a 10-min break)
Magnetic-field epoxy painting was done by robot.
Export :
- Holland
- Germany
- Italy
- United States
- Belgium
- Switzerland
and through a network of 57 countries throughout the world.
Transportation of Velosolexes was done by private contractors, with the artwork painted on their trucks at their own expense. About 220 to 260 units per truckload.
These facts were recalled by three former SEMI employees who were present at the exhibit. 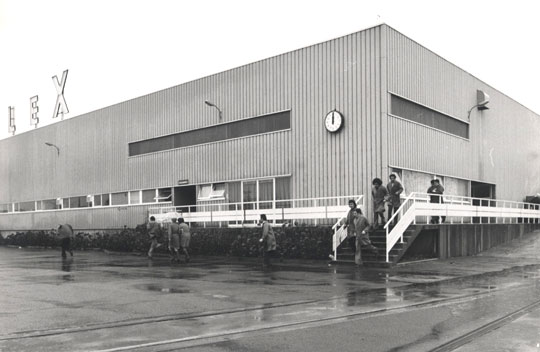 "The 15-minute break under a winter rain shower"

THE VELOSOLEX 4600 WERE ALSO ASSEMBLED IN MÂCON 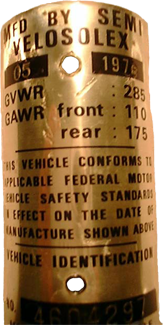 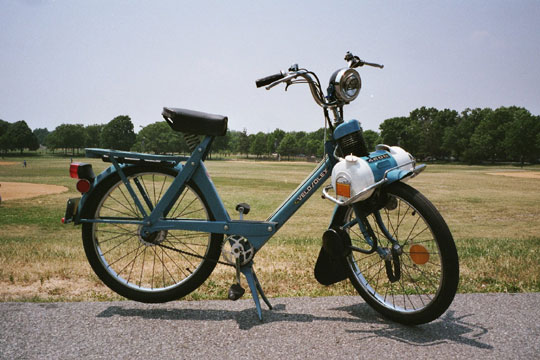 THE DECLINE AND END OF THE VELOSOLEX PLANT IN MÂCON

In June 1974, following a visit to the Mâcon plant by the Vélosolex General Manager, Mr. Boiteux, along with various municipal and departmental elected officials, it was announced at a press conference that in the following two years Velosolex would create 200 new jobs in Macon.
In December 1974, Renault acquired 51% of Velosolex shares and in January 1975 Renault would trade these same 51% of shares with Motobécane for 16% of their stock.
June 1975: Closing of the plant in Tours – 80 workers laid off.
During 1975, a process of layoffs and the closing of the main plant in Courbevoie, which consists of 3 units, is in progress, with 600 layoffs. The production of engines is transferred to Saint-Quentin. The Solex "6000" and "8000" are dropped (a loss of 20,000 mopeds without a replacement of work-hours) because of competition with Motobecane. Elimination of 80% of the network Velosolex dealers now faced with the choice of going with Motobécane or Peugeot.
Despite all this, and with severe scheduling reductions that create partial unemployment in 1977, hope is rekindled at the Macon facility.
Indeed, as of April 1977, there is a return to the 40-hr work week but this is with a loss of buying power of 8% due to not returning to the old 42¾-hr work week
Work is sub-contracted to the workers by Motobecane and Renault. Hope is rekindled by the conception of car window-raising systems for Renault (a prototype to be presented in October), but the workers were not afforded the time to get this production going.
Sad news is delivered on September 11th, 1977.
It was announced at a board meeting:
"SEMI is in serious condition, and there is little hope of a comeback".
On September 20th, 1977, assembly and sales of Velosolex are transferred to the Motobecane plant in Saint-Quentin (due to the 32-hr work week at this location in the Aisne, there will be no new jobs created!).
On September 22nd, 1978, the Board announces:
"The complete closure of the Macon factory is being contemplated".
On October 25th, 1978, the request for complete layoff of the work force is submitted to the Departmental Directorate of Labor.
The last work day is Wednesday, February 28th, 1979.
The SEMI factory closed on March 1st, 1979

CLOSING THE VÉLOSOLEX MAIN PLANT IN COURBEVOIE IN 1975 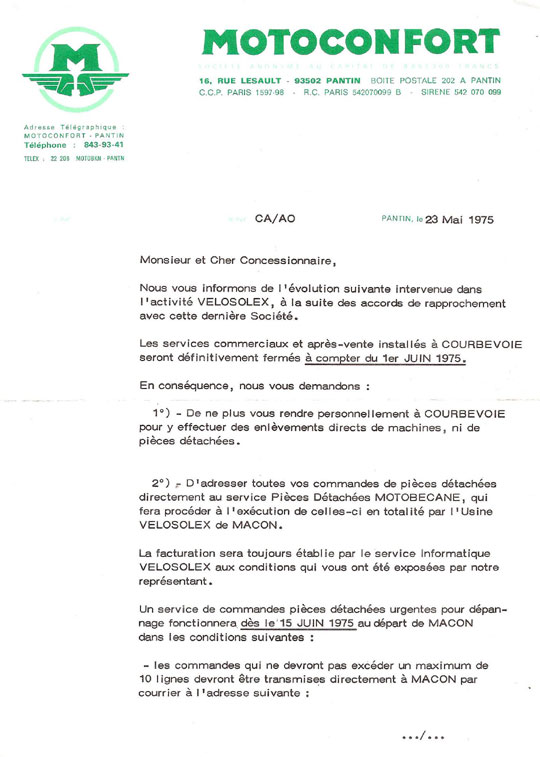 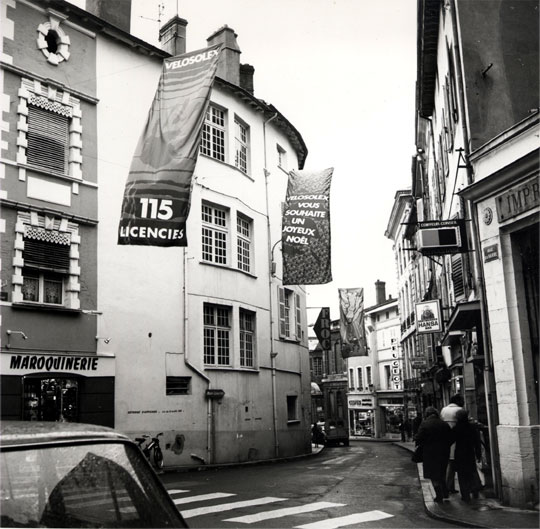 COMPANY LIQUIDATION OF SEMI – VÉLOSOLEX IN 1979 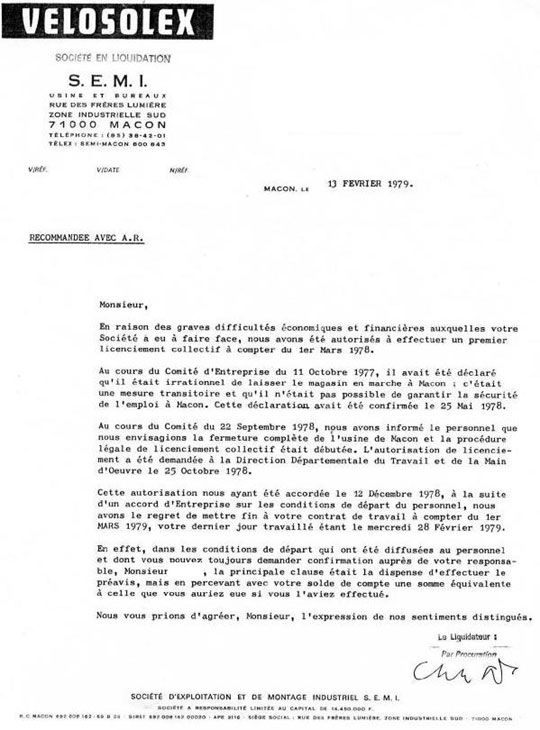 THE EMPLOYEES WHO WERE PRESENT AT THE MÂCON EXHIBIT 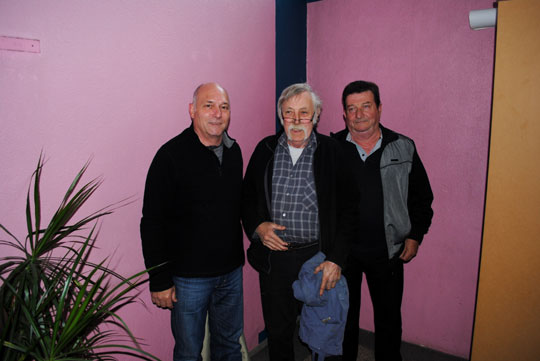 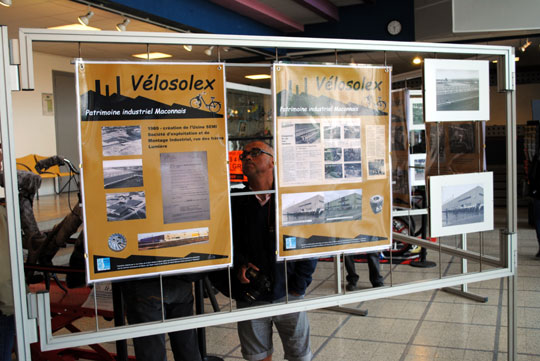 "A remarkable exhibit of the heritage of the Macon region" 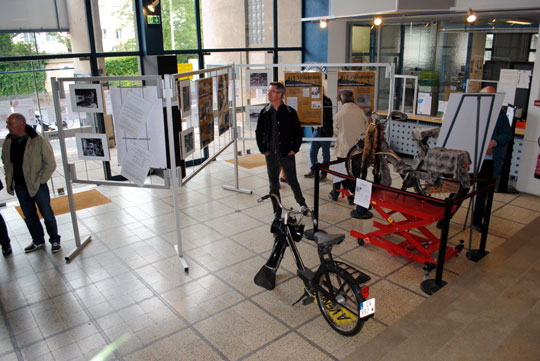 "A beautiful retrospective of the SEMI factory" 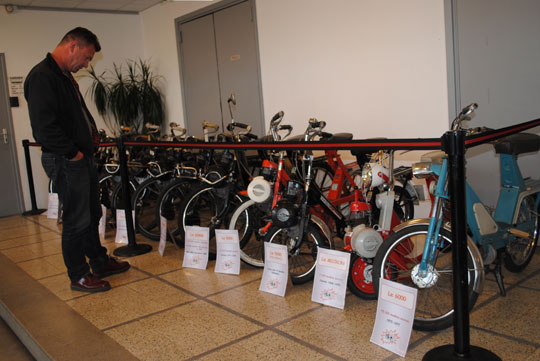 "A portion of the Vélosolex models on display"