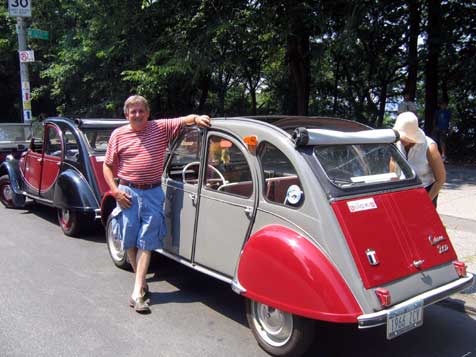 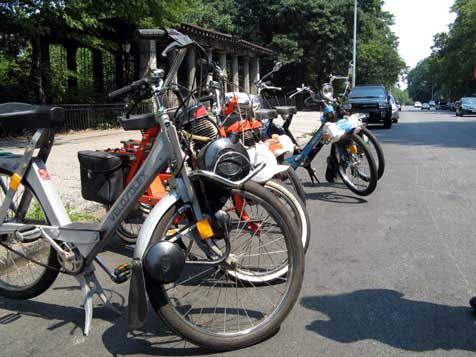 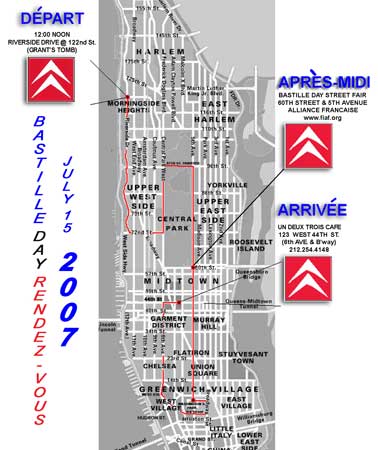 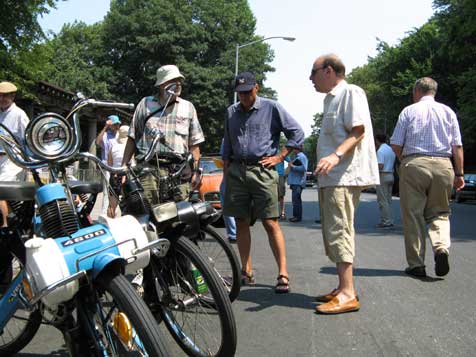 New-York: 8th Bastille Day Rendezvous 2007 by Brian Colter
The annual Greater New York Citroen and VeloSolex club’s Bastille Day Rendezvous is something that I look forward to all year long since it is the only major Solex event in the United States.
This year’s event, held on Sunday, July 15th, 2007, was to be extra special as two friends of mine from France, birthplace of the Solex, were coming to participate in the event. Jean-Claude from the Solex Millenium group had made my visit to France last year very special and memorable, and I was looking forward to trying to do the same for him and his son, Olivier, who would be accompanying him.
I visited France last year to join over 500 other Solexists from at least 13 different countries for the huge, international celebration of the 60th anniversary of the VeloSolex. It was a very exciting weekend and something that I’ll never forget.
Bastille Day is known as "le 14 Juillet" (July 14th) in France, and this fell on the day before the Rendezvous this year, the event always being held on the Sunday closest to Bastille Day. So, as a warm up for the main event on Sunday, and to help celebrate Bastille Day proper, we did some sightseeing-by-Solex in Manhattan on Saturday.
For the weekend, Jean-Claude rode my best S3800, a 1974 model in excellent condition. I rebuilt the motor with parts obtained from Velocruz, and installed a 31 cc fuel jet and 16 mm JAG exhaust which were purchased from Marc Deschamps. I’ve also opened up the air intake holes in the air filter base and installed a BP5HS spark plug, and this bike now does a blistering 21.5 mph(34 kmph)on a flat, almost three mph over the 18.7 mph (30 kmph)top speed of a stock Solex.
Olivier prefers the smaller-wheeled model 5000 Solexes and so I had a 1973 Pli-Solex all ready for him. This is the rare folding version of the model 5000. In 30 seconds, the motor can be removed and the bike folded up for transport in the trunk of your car. Unlike the previously mentioned S 3800 that has beautiful original paint, this Pli-Solex was in poor shape when I bought it and required a total strip-down and repainting. I also rebuilt the motor and did whatever else was necessary to bring this bike back to life; again, many thanks to VeloCruz and Le Solex.com for their help in finding the parts necessary to do so. 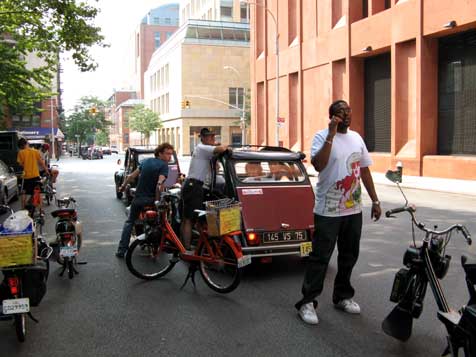 As my ride for the weekend, I chose my most recent rebuild, a beautiful Atoll Blue 1977 model 4600 V3 that provided a nice contrast to the black S 3800 and the orange Pli-Solex. This Solex must have met a quick, early death at the hands of its previous owner as the paint, chrome and tires were in mint condition, but the motor was totally seized and needed a complete rebuild. Perhaps the motor had been run without oil being added to the fuel mixture or some other such catastrophe. Many thanks to Peter from the German Solex forum for sending to me a white fuel tank in excellent condition.
On Saturday morning, the three of us took a ride downtown to Battery Park for some photos of the Solexes with the Statue of Liberty in the background. I received a text message saying that free lunch and cocktails would be provided to any Solexists that showed up at the "Les Deux Gamins" French restaurant not too far away, so we headed on over for some excellent food and drinks. The Solexes looked great parked alongside the restaurant. I occasionally have the pleasure of repairing the restaurant’s two Solexes that are used as delivery vehicles and which were also parked out in front. After lunch, we finished up the tour with some photo taking in the middle of Times Square. On Sunday, we started the day with a trek across the Williamsburg Bridge via the pedestrian/bicycle roadway. The views from the apex are spectacular, and we took many photos. The excitement continued on the way uptown to the event when we were pulled over by the police for not wearing helmets. I always carry a copy of the New York State moped laws that clearly state that helmets are not required in NY for mopeds with a top speed of 20 mph (32 kmph), and so we were soon on our way. I recommend that everyone carry a copy of their local moped laws because each state/province/country has different laws, and the laws are often confusing. No other obstacles presented themselves, and we were soon at the Rendezvous starting point. 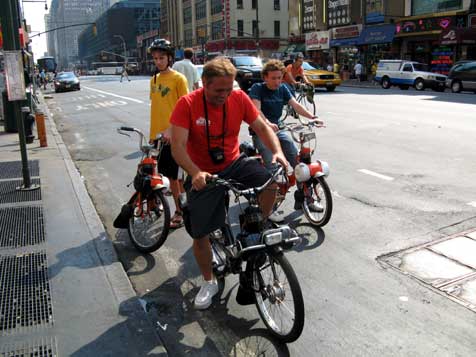 A total of eleven Solexes and about twenty-five Citroens showed up for the rally,and one Renault 4 L car. The Solex line-up included one 1967 S 3800, one 1973 Pli-Solex, one 1974 Pli-Solex, one 1974 S 3800, three 1974 4600 V1s, one 1976 4600 V2/V3, one 1977 4600 V3, one Impex S 3800, and one Blacknroll VeloSolex S 4800. The weather threatened rain all day, but it turned out to be some of the best weather we’ve had on a rendezvous. It was about 85 degrees F (30 degrees C)with acceptable humidity levels. This was hot enough to cause some minor heat-related stalling of some of the Solexes later in the day, but certainly nothing to complain about, especially when compared to last year’s scorcher or riding between the raindrops the year before.
Howie Seligman, head of VeloSolex-America and one of the event organizers, was already present when we arrived at the starting point, Grant’s Tomb on the upper west side of Manhattan. He and Steve from Steve’s Moped and Bicycle World unloaded their van-o-Solexes as more and more people showed up. It was nice to meet Julie from the Solex Owners of America Yahoo group, who brought along her son Ian and daughter Mariah, as well as their three beautiful model 4600s, all the way from Maryland.
Like last year, Howie handed out free VeloSolex-America helmets for anybody needing one or borrowing one of his bikes. First stop on the ride was the French-American Street Fair on Fifth Avenue at 60th Street, right across the street from Central Park. There were three blocks filled with food and drink stands, bands, dancers, and all kinds of French-related festivities.
Parking spaces were set aside for us to display our vehicles as part of the fair. Many fair-goers stopped by to check out the bikes and cars, and to ask questions. After spending a couple of hours at the street fair, we headed down Fifth Avenue to cool off in the shade at Washington Square Park where there is an arch that resembles the Arc de Triomphe in Paris and which provides an excellent background for Citroen and Solex photos. Last stop on the ride was the "Un, Deux, Trois Café" in midtown Manhattan. The air conditioning felt great, and the food and drinks were excellent.
I’m already looking forward to next year’s Bastille Day Rendezvous 2008. Only 364 days to go... 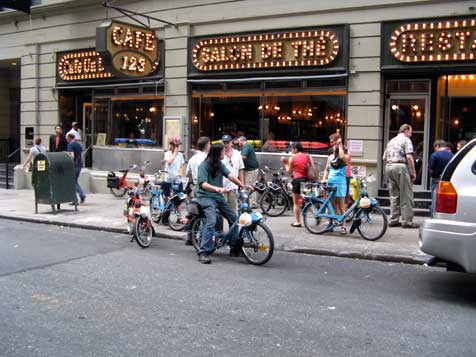 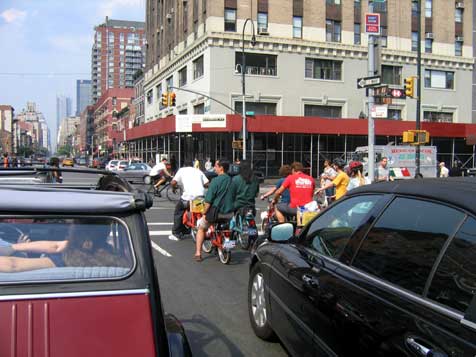 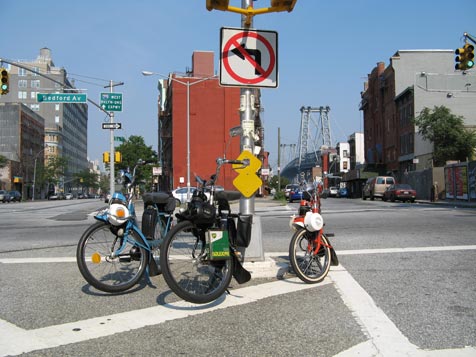 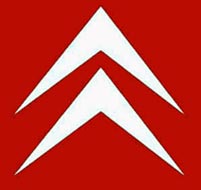